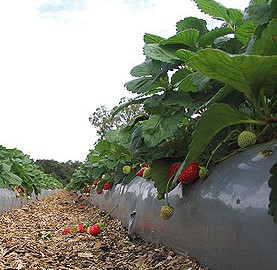 Women in northern California farm towns gave birth to smaller babies if they lived within three miles of strawberry fields and other crops treated with the pesticide methyl bromide, according to researchers 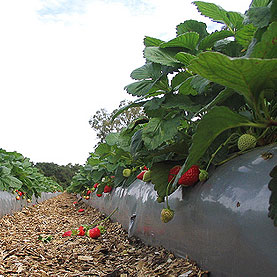 Women in Northern California farm towns gave birth to smaller babies if they lived within three miles of strawberry fields and other crops treated with the pesticide methyl bromide, according to researchers.

“There’s been very little research on residential exposure to methyl bromide. Our study is the first to look at methyl bromide and birth outcomes,” said Kim Harley, study author and associate director of the Center for Environmental Research and Children’s Health at the University of California, Berkeley.

The soil fumigant, which is injected into the soil before planting, can volatize into the air, exposing nearby neighborhoods.

Use of methyl bromide has been declining over the past decade under an international treaty that phases out chemicals that deplete the Earth’s protective ozone layer. Strawberries and a few other crops are exempt under the ban because they are deemed “critical uses.”

The researchers studied babies born to 442 pregnant women, mostly Latinas from Mexico, living in the Salinas Valley in 1999 and 2000, when methyl bromide was widely used. Its use near each woman’s home was based on data from the state’s Pesticide Use Reporting system.

Use of the pesticide within three miles of the home during the second trimester of pregnancy was associated with an average birth weight about 4 ounces less than babies from areas with no methyl bromide use.

That 4-ounce difference is about half the birth weight decrease linked to smokingduring pregnancy, the researchers said.

The significance of the slightly smaller babies when it comes to their health is unknown because they are within normal ranges. Only 4 percent of the babies were born at what is considered a low birth weight, less than 5.5 pounds. Low birth weight babies may be at risk for developmental delays and learning problems.

“This data would be more meaningful if it demonstrated that exposure led to abnormality,” wrote Giffe Johnson, a toxicologist at the University of Southern Florida who studies pesticide levels in agricultural workers.

Harley said that while the clinical significance of the findings remains unclear, “for a baby on the low end of normal birth weight, 4 ounces could make a big difference.”

Harley also noted that while this group of agricultural workers, and Mexican immigrants in general, tend to have healthy birth weight babies, “across the board, we saw a shift toward slightly lighter babies.”

One major limitation is that no one knows how much methyl bromide the women were actually exposed to. Their exposures were estimated based on their addresses, with no actual measurements.

“A woman could work 12-hour shifts 40 miles from home or spend little time outdoors near her own home. It’s impossible to say whether these estimates represent an accurate picture of exposure,” said Myles Cockburn, an epidemiologist at the University of Southern California who studies pesticides.

About 41 percent of the women did some field work while pregnant, although few worked in fields that had been treated with methyl bromide.

While strawberry growers have been trying to replace methyl bromide for several years, no suitable alternatives have been found to work on a large scale.

Methyl bromide use has been cut nearly in half in California since 2002, but growers there still used almost 4 million pounds in 2011, according to the California Department of Pesticide Regulation.

Despite the decline in usage, “the findings remain very relevant for the farm worker population, especially those living in agricultural areas where strawberries are grown,” Harley said.

The methyl bromide study is part of a 14-year, ongoing project by the scientists to investigate potential health effects of environmental exposures on children born in the Salinas Valley, one of the nation’s most productive agricultural regions.

The California Strawberry Commission and CropLife America, a trade group representing pesticide manufacturers, were unavailable for comment on the new study.

Hormones Out of Whack: The Global Threat From Endocrine-Disrupting Chemical...
Scroll to top